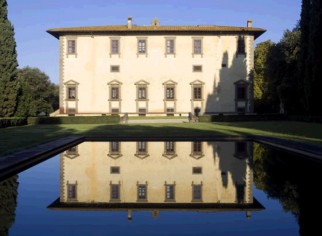 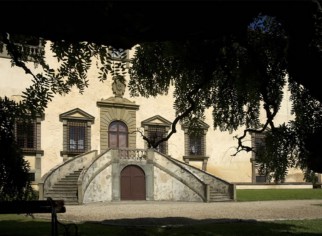 We are very proud to say that Collazzi was the very first grower to allow The Sorting Table to represent them in the United States. It has been a marvelous relationship from the beginning. Thank you, Lamberto!

Villa Collazzi is one of the most impressive estates in all of Tuscany. Set atop a hill located a few miles south of Florence on the old road to Volterra, it offers commanding views of the surrounding countryside. This architectural landmark was originally designed by Michelangelo in 1560 for his friend, Agostino Dini. It features two rows of loggias above a large courtyard enclosed on three sides and open on a fourth. The building remained incomplete for centuries until it was purchased by the Marchi family in 1933.

Of the estate’s 960 acres 71 are currently planted to vines. The soils are composed of clay, sand and rock. Well-draining and low in organic matter, they offer the perfect habitat for grapes. The property is planted to Cabernet Sauvignon, Merlot, Cabernet Franc and Sangiovese. The wines are aged primarily in new French oak barrels. The estate produces a Chianti Classico called I Bastioni and a Super-Tuscan blend called Collazzi.

Villa Collazzi is currently run by three siblings from the Marchi family – Carlo Marchi, Grazia Marchi Gazzoni Frascara and Bona Marchi Frescobaldi. The first vintage under the Collazzi label was 1999. During the last decade the Marchis invested heavily in the development of Collazzi’s farming business, renewing the vineyards and restructuring the cellar.

The vineyards are located at the Collazzi estate located in the town of Impruneta (Florence). Total acres under vine = 71.

Sandy and clay soils, rich in limestone, with an abundantly rocky texture, have led to the choice of planting grapes of Cabernet Sauvignon, Merlot, Cabernet Franc, Petit Verdot and only small amounts of the more traditional varieties.

Training System – Mostly spurred cordon, which is most suited to grape varieties which bear fruit from (basali) buds, such as Cabernet Sauvignon and Merlot.

At Collazzi the microclimate is normally warmer and drier than the surrounding area. Part of the estate lies in a natural amphitheater, with a perfect south-westerly exposure. The high amount of sun light and the high daily temperatures allow a prolonged, complete ripening of the farming products, consistently each year.

Wine is grown on 25 hectares (62 acres), while the specialized cultivation of 120 hectares (297 acres) of olive trees produces a precious extra virgin olive oil. Collazzi is also dedicated to the raising of bees, yielding a small quantity of organic honey.

Alberto Torelli has been Tenuta Collazzi CellarMaster since the harvest 2005.

Born in Florence Toscana Italy in 1981, since the beginning one of his passions is the agriculture which runs in the Torelli family for generations.

At the age of twenty, he began his studies at the University of Agriculture of Florence, studying Winemaking and Viticuture Processes, he started working in some wine companies in the Chianti area.

In 2005, met Lamberto Frescobaldi in a lucky situation and moved to work at Collazzi in the year that the winery decided to renovate its cellar introducing all modern techniques of wine processes.

10 harvests later, he is still working in Collazzi with the same passion of the beginning, and the wines produced at the Tenuta are every year the fruit of his job and all Collazzi great staff.

He describes himself as a “A Lover of Land, ambassador of its flavors”.