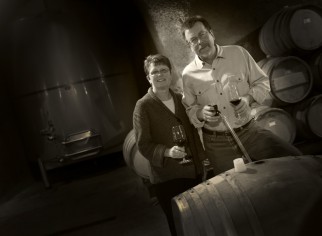 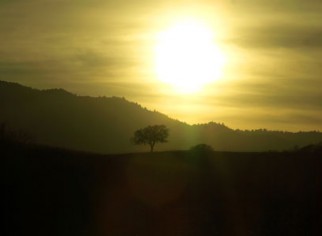 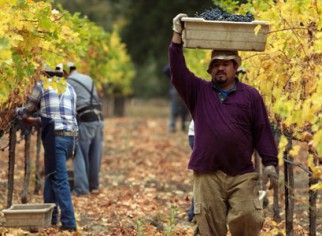 NOTE:  Janzen is available through The Sorting Table in TX only. Please click on the “Grower Website” link above for more details on the winery and their wines.

We live where we work, on the sunny and vine-dappled peaks of Napa Valley, overlooking the town of St. Helena. Possessed of naked idealism and fierce, if cloudy, ambitions, we undertook in 1993 to etch out our own signature wine. We envisioned something that, like Sir Lawrence Olivier or Kate Hepburn, could make an impression both immediate and lasting. A wine of unmistakable co-authorship: terroir by Napa Valley, style by cloudy-headed winemaker. And, (because we’re really not all that self-serious) a wine with a twinkle in its eye, promising equal parts mystery and mischief. And so we came up with two wines, each a proprietary blend. First and foremost, Bacio Divino, a divine kiss of predominantly Cabernet Sauvignon, with the added dimensions of Sangiovese and Petite Sirah. And then, in 1999, Bacio Divino’s vivacious kid sister Pazzo: Sangiovese-centric with undercurrents of Cabernet Sauvignon, Syrah, Zinfandel (on occasion), Merlot and (can you believe) Viognier.

A dozen vintages into our small family-run venture, we are immensely proud of our wines, humbled by the acclaim and yet still as restless as ever. Thus, in 2006 we released a third blend: the elaborate, brooding Vagabond, Syrah’s chance to star with Cabernet in a support role. And a year later, having found our voice through blending, we set out to express that same voice through a single varietal. The 2004 Janzen Estate “To Kalon Vineyard” and 2004 Janzen Estate “Cloudy’s Vineyard” single-vineyard Cabernet Sauvignons are luscious, terroir-driven exemplars of Napa’s noble grape. Our devotion to Cabernet and to blending will soon coalesce into yet another proprietary red: the Janzen Estate Napa Valley Cabernet Sauvignon, an exquisite mélange of the best Cabernet lots from among our 11 Napa Valley vineyards.

A lot of thought, heart and labor went into the making of these wines. Enjoying them will, we hope, prove effortless.