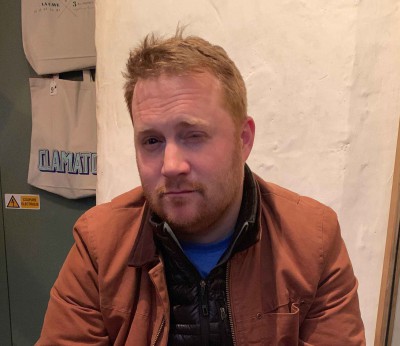 I was born in Evanston, Illinois to two classical musicians.  The dinner table was a holy ground where no matter how little time we had with concerts, afterschool activities or anything else we would catch up with each other about our days and there was always food that was carefully made and a glass of red wine on the table.  My focus for most of my life was on the arts, specifically theater and writing, but also baseball.   After I graduated from Wesleyan University, I knew I wanted to write, but I also knew it was a hard journey.  Restaurants were a great opportunity to have time to write and also make some extra cash.  And in Chicago where there were few sommeliers, the best way to improve your income was to learn and sell better wine.  I moved to New York in 2008 in hopes of getting an internship at Marvel comics, which I did, but I also took my love of wine that was in its infancy and dove into the sommelier world at Del Posto.  I became connected to the amazing sommelier scene in New York and the opportunities and my education continued to grow.  But after 4.5 years in New York, I knew I loved working in wine but also wanted a better quality of life.  Returning to Chicago I had great experiences in restaurants that challenged me to grow and mature, but I have carved out that quality of life with a great girlfriend, a great dog, and allowing time for myself to watch Cubs game and do some writing.

Where have you lived?

Chicago, Connecticut, New York, and England, with a few harvests in Italy and California.

How did you start in the wine business?

I began in the wine business at my family dinner table, although their selections have grown decidedly better over the years.  My first restaurant job was at Osteria Via Stato, where I worked with Belinda Chang and began my first real wine education.  But my views on wine were really defined by my time working with Elisabetta Foradori at Foradori Winery during her switch over to biodynamic farming.  I have worked as a Sommelier at Del Posto, Dressler, Tribeca Grill, Alinea and created the ‘Best Medium Sized’ Winelist in the World according to the World of Fine Wine at Formento’s.  Great mentor’s along the way have led the way for me.

Best concerts of your life

After tasting wine all day I want to drink a…

What puts the biggest smiles on your face?

Cooking a dinner at home with my girlfriend and dog. Picking up comics each week at the comic shop. When you sit at a winery and the words and emotions of a wine maker match what’s in the glass.

A tasting of dry Riesling at Foradori Winery, which totally changed my opinions of white wine and specifically Riesling.  Also there was a dinner at Del Posto where not only did I taste a slew of Barolo and Barbaresco from 1978, but also got to taste 1990 and 1969 La Tache from DRC.

Last bottle of wine of wine you ever want to drink

Francois Raveneau Chablis or Bartolo Mascarello Barolo, depends on the time of year.

While on the wine route I love to…

Enjoy the silence and space of the vineyard. Having always lived in big cities, space and silence are always at a premium and you can just be. That and eating at whatever place is know to locals and has a deep cellar.

If you won the lottery…

I’d first get on a plane to Italy and eat at La Pineta and then I’d start thinking about all the great places I’ve never been.