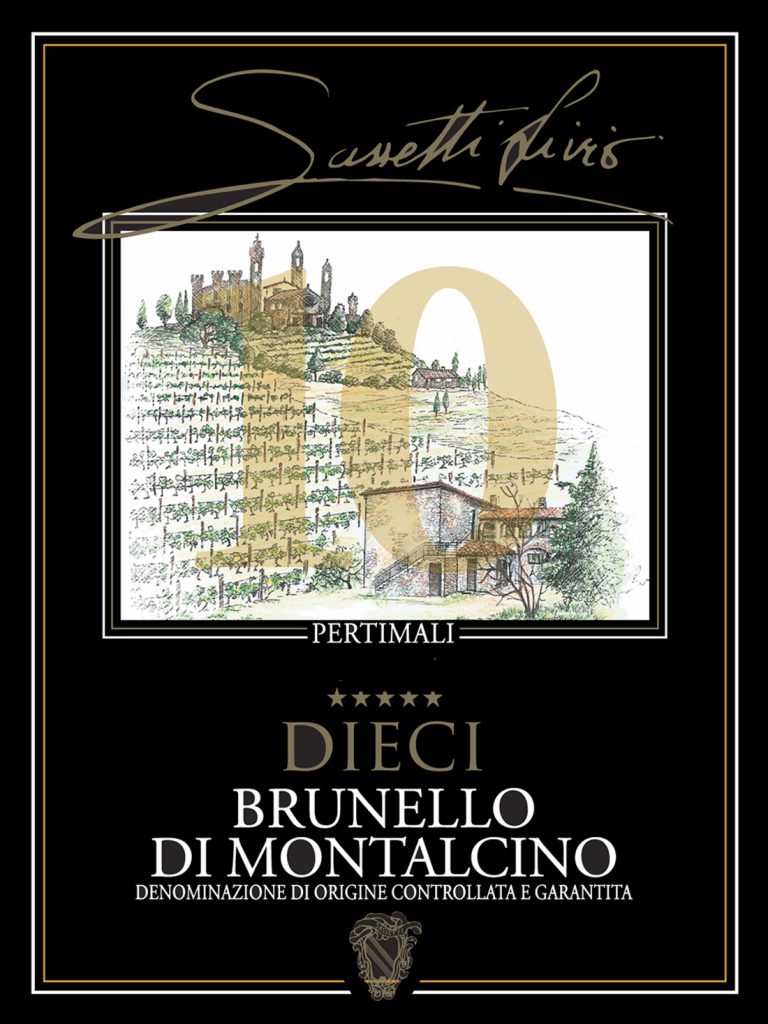 The persuasive charm and attentive embrace of the Sassetti family lures one to the vineyards, cellar and people who have farmed some of Montalcino’s finest vineyards for over a century. Four generations of the Sassetti family have made wine in Montalcino. Livio worked the historic property through the late 1970s, then purchased the 16 hectare vineyard of the now–famous Podere Pertimali. The Podere is in the Montosoli area, north of Montalcino, a particularly well-known area for the cultivation of the Sangiovese grape. Faithful to the teachings of the family,  Livio and Lorenzo have over time renewed and expanded the vineyards, preserving the genetic heritage of the old vines and preserving the primigenie characteristics.

Released one decade after the harvest, the 2007 Brunello di Montalcino Dieci is a one-off wine meant to celebrate an exceptional vintage. The aging process sees 48 months in large Slavonian oak casks and the wine then rests in the bottle for the remaining years before its release. Only 8,000 bottles are available. The bouquet clearly shows tertiary aromas of licorice and tar, but the wine also has dark berry and dried cherry at its core. The finish is smooth and silky. The tannins have had considerable time to integrate. The wine still has life within and should continue its slow evolution. Drink 2017 – 2025

Very deep ruby; this is a little dark for my idea of what a 100% Sangiovese wine and an 11-year-old wine should look like. Spicy sweet chocolate and flinty aromas complement ripe red cherry on the forward nose. Then harmonious but lively acidity and still-chewy tannins nicely frame and support the flinty blue and black fruit flavors. Finishes with a hint of allspice and underbrush. Only 4,000 bottles of this wine were made; it is the 2007 Brunello normale (not riserva) that was kept in the estate cellars (in oak and then bottle) for 10 years and is being now put on the market as a library release. (By contrast, the 2006 vintage, the majority of Brunellos of which were characterized by longer staying power than the riper 2007s, will be released on its 20th birthday and will be sold as 2006 Brunello di Montalcino Venti.) This 2007 is an outstanding wine but I am docking it a point for its color.

Pertimali’s 2007 Brunello di Montalcino Dieci leads off with balsamic-infused black cherry and sweet strawberry, along with minty herbs, as notes of damp earth, crushed stone, and dried floral tones build. On the palate, soft, almost-fleshy textures usher in ripe red and black fruits, giving way to saturating minerality and spice, with slow-mounting tannins firming the experience, as inner florals toward the close provide lift. There are depths here that are yet unseen, the wine having been reserved in barrels for this release, yet I don’t find that the extended aging gets at all in the way; instead it balances the ripeness of the vintage. Even with its tannic clout, the 2007 Dieci is drinking beautifully today, and I expect that it would open even further if decanted. Fans of the Pertimali style will not be disappointed. 2020 – 2032